My kid’s school is having a party tonight and I decided that I was going to try my hand at layered jello. How hard could it be?

I am also on maternity leave and since we only have one car, I am at home. I decided that I was going to make a dish to bring with the stuff we had on hand. My first thought was jello because I usually have a few different colors. The party was superhero themed, so I turned to the internet for inspiration. I came across this picture of comic book style jello.

Way to go that mom for throwing an awesome photo perfect party.

Anyway, I rummaged through my jello and found that I indeed had blue, yellow, and red. I wasn’t sure how to go about the white layer, so I turned to YouTube and watched this lady’s video.

Turns out you need gelatin and sweetened condensed milk. I always keep a can of condensed or evaporated milk for pumpkin pie and I was in luck.

I assembled my ingredients and was ready to go. 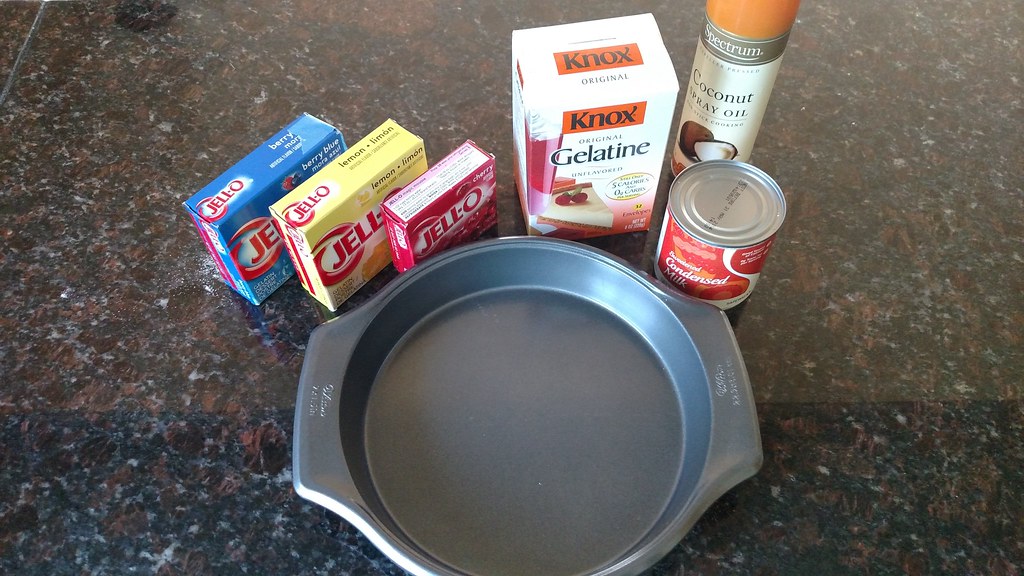 Basic recipe for each layer is as follows:

White layer makes 3 1/4 cups. Divide this evenly for the number of layers needed and increase recipe for number of layers. I only needed 2 layers, so I made one batch and reserved 1 c for each layer.

Each color needs about 30-45 minutes to set before adding a new layer. It was about noon, so I got started.

I greased the pan with coconut oil and spread it around with paper towels so that it was greased, but not greasy. I decided to start with red because I wanted it to be on the top when flipped. Made the jello, got fancy with the strainer to reduce the amount of bubbles in my layer. You could probably skip this and just let it sit or just pop them. 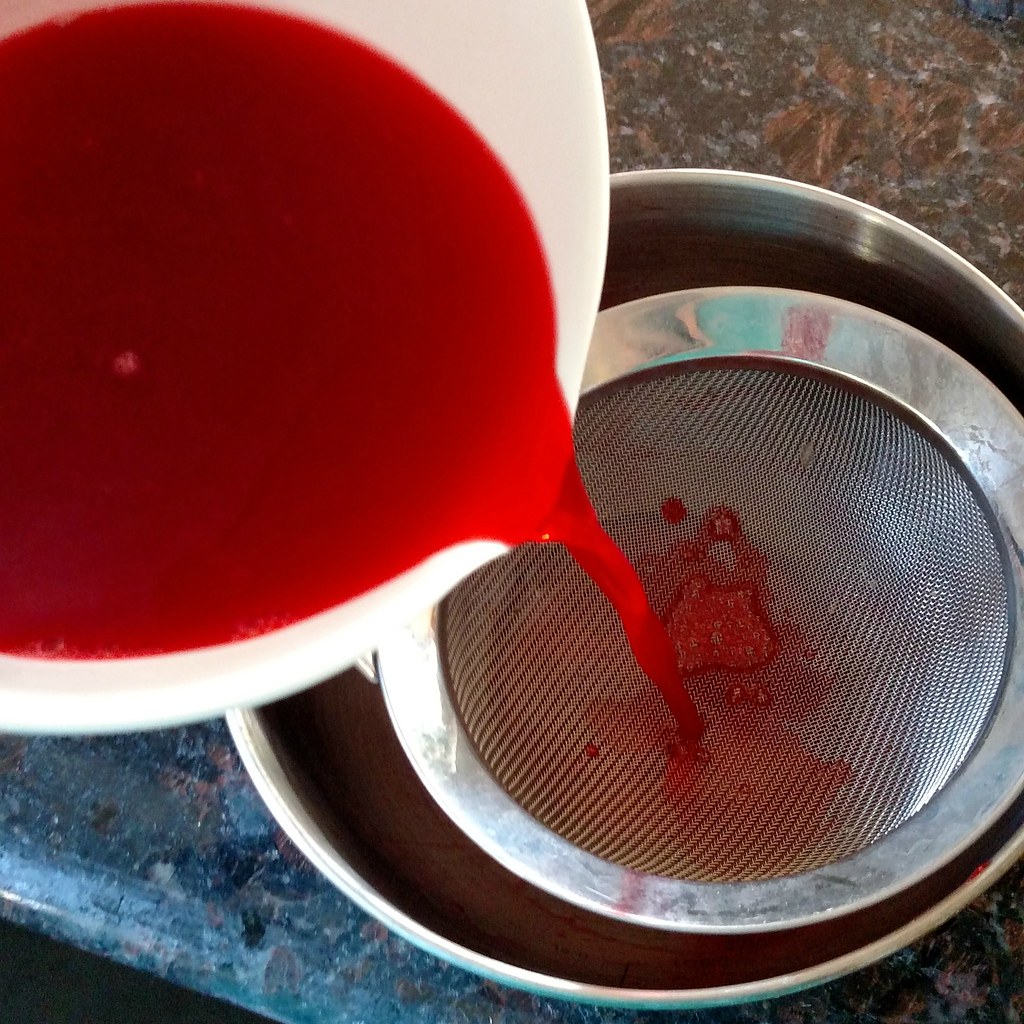 I let the layer set for 45 minutes. This wasn’t necessary, I think I could have done 30 minutes if the layer was chilled beforehand. However, I spent this time working on my white layer. Assembled the items for a photo and noticed the date on the can was BEST BEFORE 31 MAY 2014… 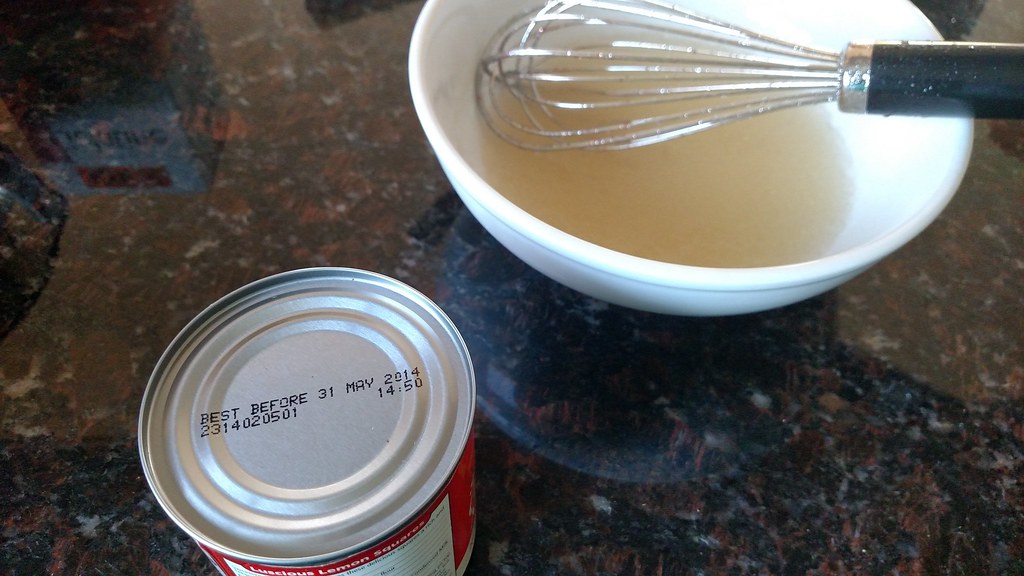 Decided to consult the internet and found that I was not the first one to have this issue. 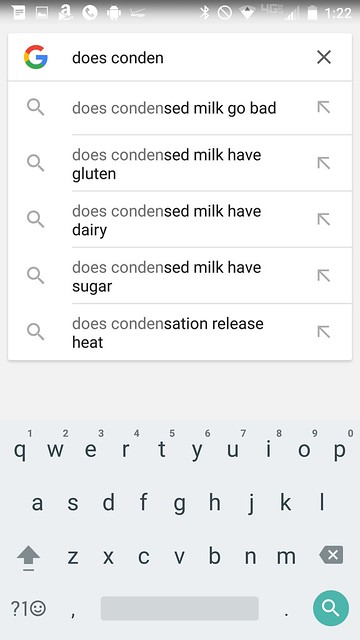 Read a few articles and found that yes, it does expire, but that you can still cook with it because all that really happens is the color changes to more of a caramel color. So, I decided to go with it. I quickly realized that color was important to me and the smell wasn’t great. I tasted it and it didn’t taste bad, but it wouldn’t have been that lovely paper white color I was going for and I didn’t want to poison everyone. I considered my options. I could have no white layer, but that’s no fun, so I decided to try and make my own white layer using science and my brain.

I pulled out my milk, gently heated 2 1/2 cups on a non-stick pan and added 1/2 c sugar. There was 10 minutes left on the clock, so I just stirred it on a low heat until it was about time to take out the jello. I tasted it and oooooh was it sweet. I could have gone with half the sugar easy. Oh well, the kids’ll love it. I combined 1/2 cup cold milk with 2 packets of gelatin, whisked it, and folded in the hot milk, then separated it into equal portions. 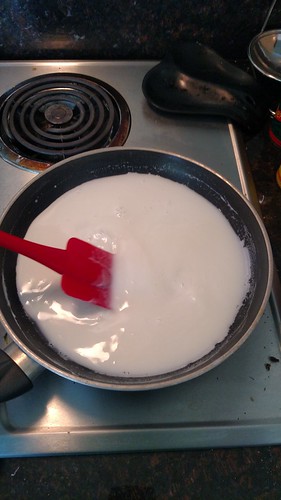 Took the pan out and added the white layer. Well fuck, it melted the jello and turned pink. 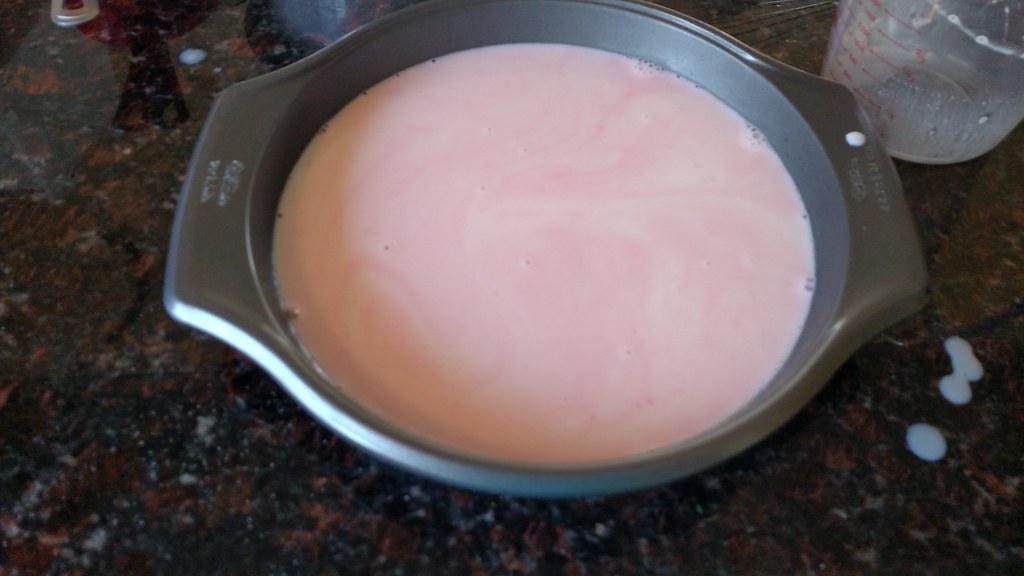 I put it in the fridge and had resigned myself to a dreaded Pinterest fail. Then I thought, no! that’s not going to happen to me! I pulled it out of the fridge, poured out the milk layer, and literally washed it off with cold water until all the milk had come off. I patted the layer dry gently with paper towels and returned it to the fridge to harden again. I had about 1 3/4 cup of milk left, so I split them again and put half the milk in the fridge. I set a timer for 20 minutes.

During this time I made the yellow layer because I wanted to make sure it was cool by the time the white layer came out. Unfortunately, I realized that I had added too much water, so I added more water and put it in some containers for my kid’s lunch. 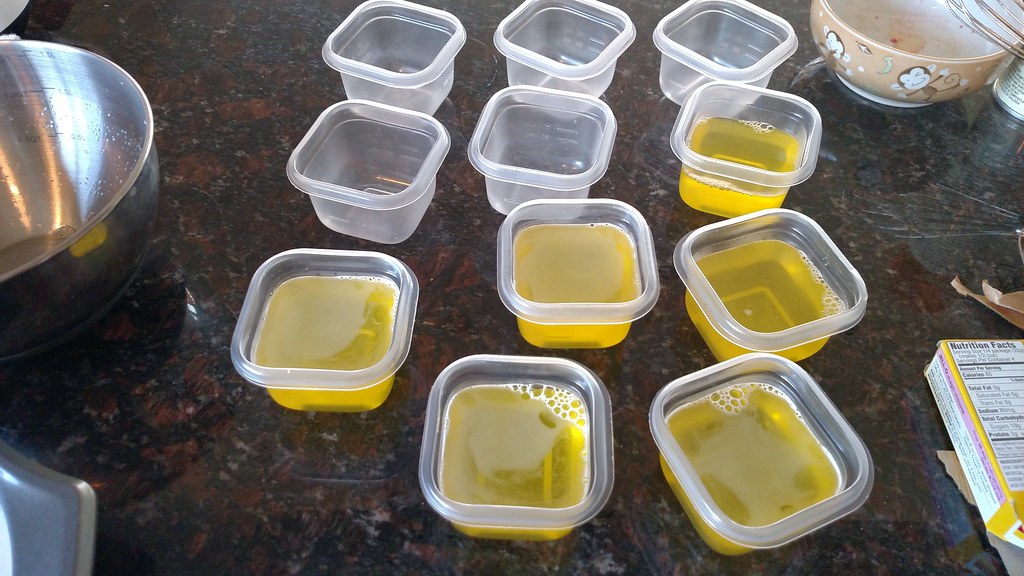 Thankfully, I had another yellow jello, so I started over again and managed not to fuck it up. I added the yellow layer after the white had set. Set the timer for 40 minutes.

I was getting the blue layer ready. I had actually used a portion of this big box of blue for another creation and so it was not a fresh box. Once I added the packet to the gelatin water mix I noticed a peculiar purple tint. Fuck! It was purple! I put the wrong color back in the wrong box and had no blue jello! I added more water and made more jello for my kid’s lunch. 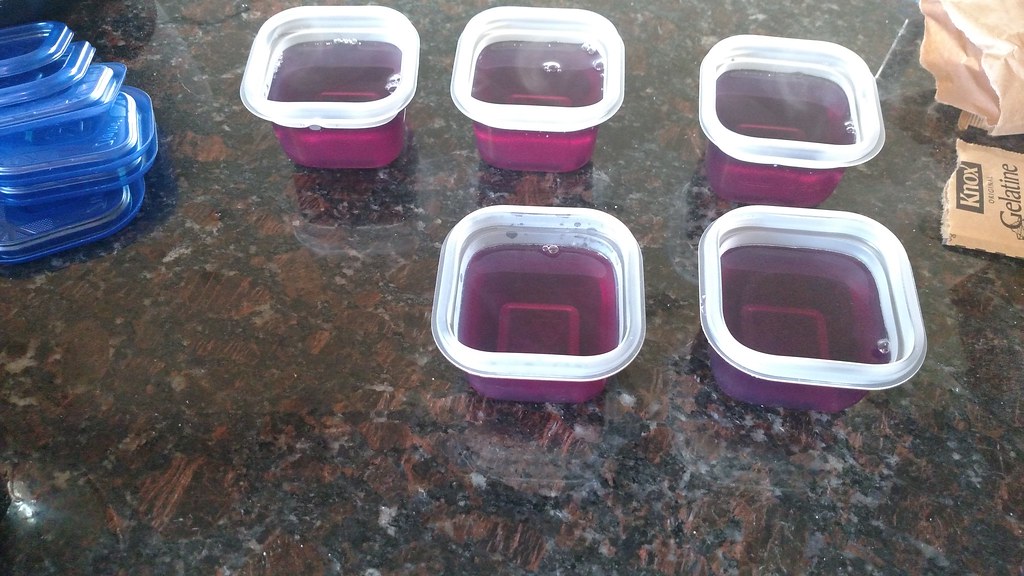 Did I let this get me down? Fuck no! At this point I felt I could do anything. SCIENCE bitches! I took 2 packets of  gelatin, 1/2 c apple juice, 1/4 c sugar, 1 1/2 cups boiling water, and 3 drops neon blue food coloring. BOOM POW, I had created blue jello! 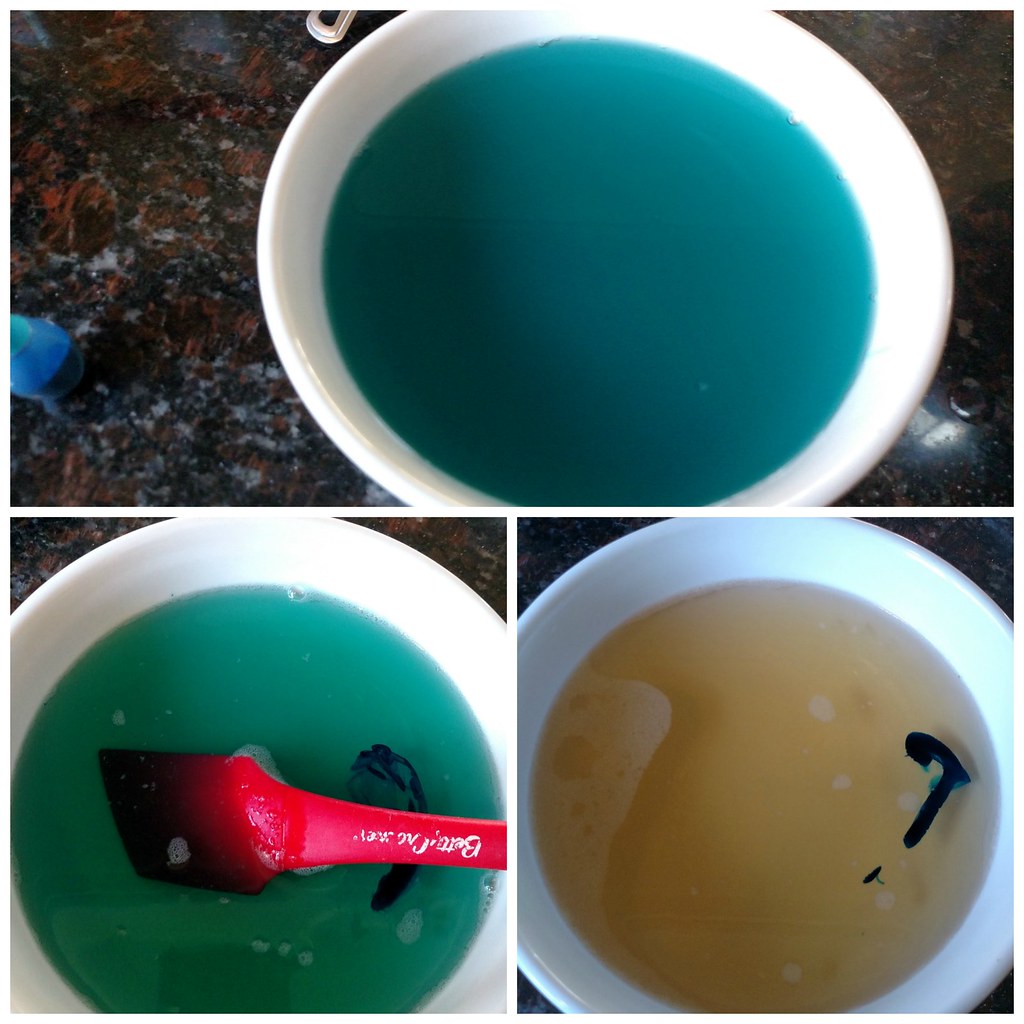 I learned a lot in this exercise or rather, I learned a lot about what not to do. I am waiting for the whole thing to set and I am not convinced that I will be able to bring it with me to the party, but I tried.

Ok, jello set. Cut the round with a knife and then placed it in a hot water bath… too long, but not something I couldn’t salvage. I turned it over on a dish and cleaned the melted bits away. I am somewhat happy with it. I unfortunately do not have a serving spoon, so I am just going to bring a regular spoon. I should really get one of those. 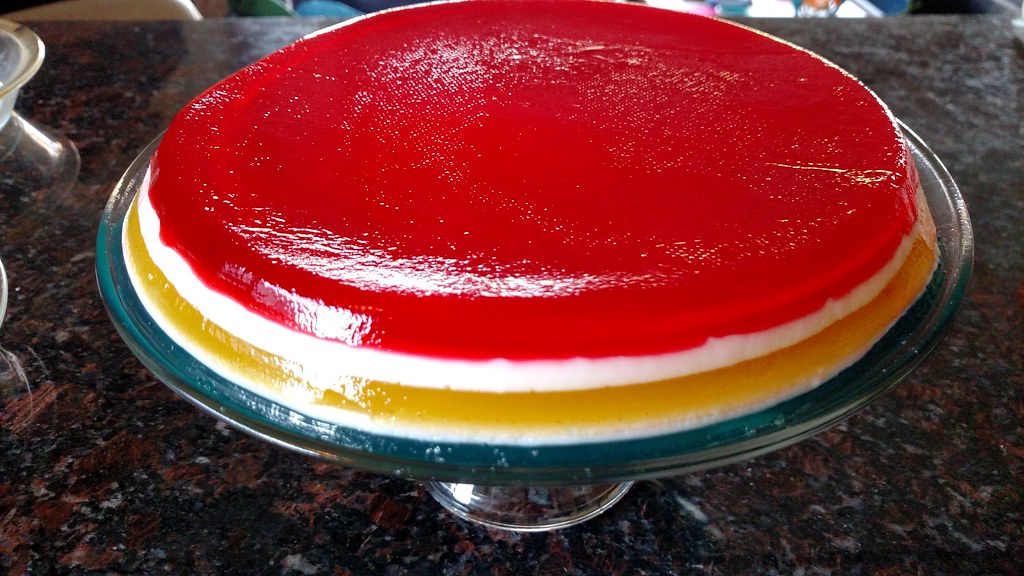 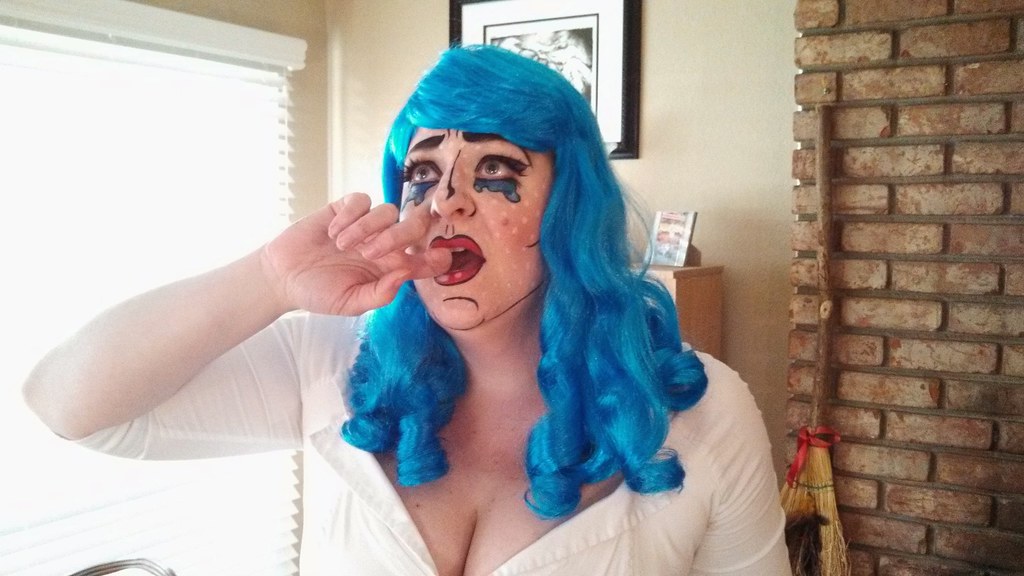